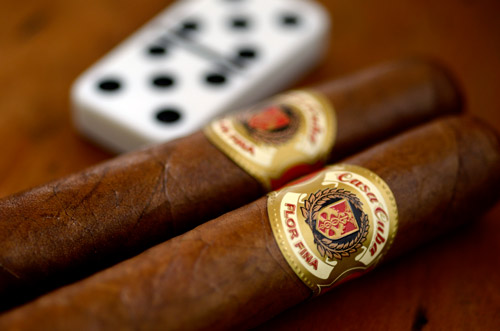 The Arturo Fuente Casa Cuba was blended by company patriarch Carlos Fuente Sr. His intent was to create a blend that reminded him of the cigars he smoked and rolled in his youth with his father, Arturo Fuente, using Cuban tobacco. The sizes in Casa Cuba are named after Cuban dominoes. Doble Cinco, which is a robusto size, was the most outstanding in the line. Complex and nuanced, the cigar scored 91 points. Read full review here 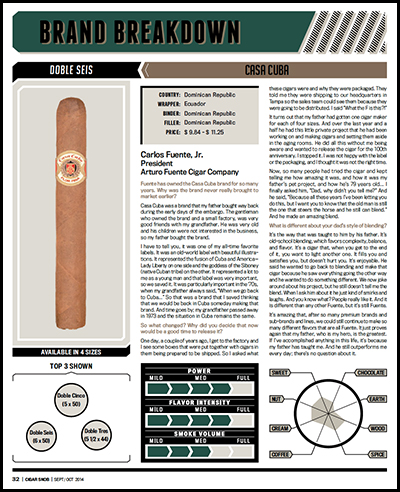 Fuente has owned the casa cuba brand for so many years. Why was the brand never really brought to market earlier?

Casa Cuba was a brand that my father bought way back during the early days of the embargo. The gentleman who owned the brand and a small factory, was very good friends with my grandfather. He was very old and his children were not interested in the business, so my father bought the brand. I have to tell you, it was one of my all-time favorite labels. It was an old-world label with beautiful illustrations. It represented the fusion of Cuba and America—Lady Liberty on one side and the goddess of the Siboney (native Cuban tribe) on the other. It represented a lot to me as a young man and that label was very important, so we saved it. It was particularly important in the ‘70s, when my grandfather always said, “When we go back to Cuba…” So that was a brand that I saved thinking that we would be back in Cuba someday making that brand. And time goes by; my grandfather passed away in 1973 and the situation in Cub a remains the same. 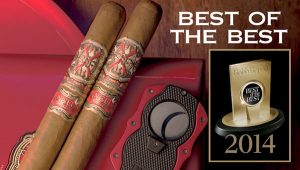 A spicy-sweet smoke that was 101 years in the making…

Established in 1912 in Tampa, Fla., by the late Arturo Fuente Sr., the company that is now called Tabacalera A. Fuente y Cia is the world’s largest family-owned cigar business, boasting a portfolio of brands that includes Arturo Fuente, Hemingway, Don Carlos, and Fuente Fuente OpusX. The Fuente company was going to release three new limited-edition cigars in 2012 to mark the 100th anniversary of its founding, but shortly after it announced those plans, a fire in one of its warehouses destroyed 8,000 bales of tobacco that had been aged—some of it for as long as 10 years—for the centennial cigars. The company salvaged enough of the tobacco to produce the cigars, but the fire postponed their release until last year. “Although 2012 was our 100th anniversary, 2013 is year one of our second century,” declared Carlos “Carlito” Fuente Jr., a grandson of the company’s founder.

Of the three new releases, the Fuente Fuente OpusX Angel’s Share—a milder version of the company’s legendary OpusX—is the most outstanding. The cigar takes its name from a term used by whisky distillers: The angels’ share is the amount of the spirit that, cellar masters say, goes to the angels as it evaporates during the barrel-aging process. If the name is intended to suggest that the cigar produces a heavenly smoke, then Angel’s Share is fitting.

When the OpusX debuted in 1995, it was heralded as the first all-Dominican cigar to rival Havana cigars in quality and strength. As with the OpusX, the Fuente company sources the tobaccos for Angel’s Share from the family’s Château de la Fuente farm in the Dominican Republic. But to produce a milder flavor, it has reblended the OpusX filler, and for the wrapper and binder it uses leaves from the center of the plant instead of the top. The wrapper’s smooth, silky texture is balanced by spicy-sweet top notes that intensify as the cigar burns.

The Angel’s Share is available in four sizes—corona gorda, robusto, double corona, and Churchill—and is priced from $13.16 to $17.44.

20 years ago an Opus fan, but for the last 15 a regular Don Carlos or Hemmy. 3-4 years of age seem to be in my wheelhouse with the exception of the DC Lancero. The older the better. If the Pussycats were readily available I’d smoke a lot of them.
Good fresh, great aged, I choose a Fuente cigar on those special days.
Casa Cuba, Double Cinco in pre release slide lid box are the best! Unfortunately there are too few remaining…..Don Carlos #3 and #4 as well as production Robustos, I’ve smoked many hundreds of each…..I’d love to try an Opus X filler binder with Cameroon DC Lancero wrapper!!!
No matter how long it’s been since I have smoked one, whenever I pick up a Fuente I have enjoyed it’s like the first time all over again.
Consistency in staple products such as the Don Carlos and Hemingway are what I can expect, every time I reach for a Fuente.
Cut my teeth on the Hemi Classic back in 91′, love the Short Story for a quickie but always seem to gravitate to the Classic, just smooth!
Categories
2
OF3
Share:
Profiles:
Profiles: