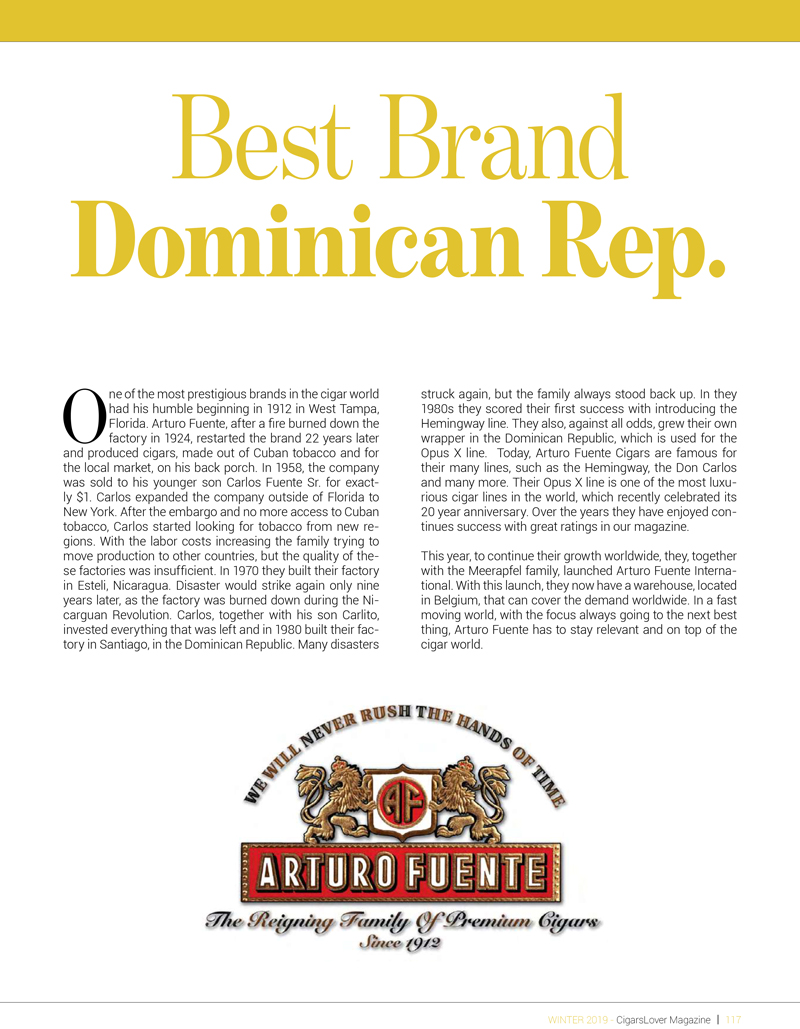 One of the most prestigious brands in the cigar world had his humble beginning in 1912 in West Tampa, Florida. Arturo Fuente, after a fire burned down the factory in 1924, restarted the brand 22 years later and produced cigars, made out of Cuban tobacco and for the local market, on his back porch. In 1958, the company was sold to his younger son Carlos Fuente Sr. for exactly $1. Carlos expanded the company outside of Florida to New York. After the embargo and no more access to Cuban tobacco, Carlos started looking for tobacco from new regions. With the labor costs increasing the family trying to move production to other countries, but the quality of these factories was insufficient. In 1970 they built their factory in Esteli, Nicaragua. Disaster would strike again only nine years later, as the factory was burned down during the Nicarguan Revolution. Carlos, together with his son Carlito, invested everything that was left and in 1980 built their factory in Santiago, in the Dominican Republic. Many disasters struck again, but the family always stood back up. In they 1980s they scored their first success with introducing the Hemingway line. They also, against all odds, grew their own wrapper in the Dominican Republic, which is used for the Opus X line. Today, Arturo Fuente Cigars are famous for their many lines, such as the Hemingway, the Don Carlos and many more. Their Opus X line is one of the most luxurious cigar lines in the world, which recently celebrated its 20 year anniversary. Over the years they have enjoyed continues success with great ratings in our magazine. This year, to continue their growth worldwide, they, together with the Meerapfel family, launched Arturo Fuente International. With this launch, they now have a warehouse, located in Belgium, that can cover the demand worldwide. In a fast moving world, with the focus always going to the next best thing, Arturo Fuente has to stay relevant and on top of the cigar world.