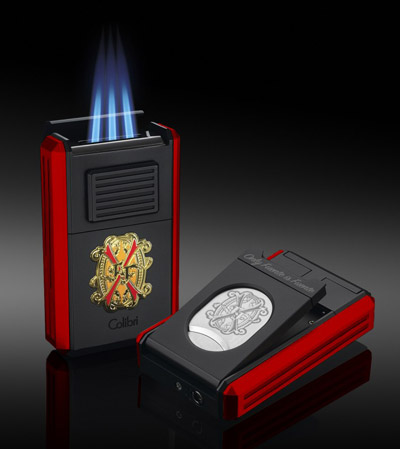 ”It was a true pleasure to work with Les Mann, and our extended family at Colibri. They have been amazing to work with, and so generous to the Children of the Cigar Family Charitable Foundation. I thank you,” says Liana Fuente, Creative Marketing Director for the Fuente companies and fourth-generation member of the Arturo Fuente cigar family.

“It’s been a real thrill to have worked closely with Carlito, Liana and the Fuente family to help their foundation over the years,” says Colibri Executive Vice President, Les Mann. “They are the premiere cigar family in the world, and their cigar brands are amongst the most respected and sought-after. We wanted to do a project that was perfect; one that represented the ideals of both brands. I think fans of Colibri lighters and Fuente cigars are going to love it. This limited edition series is really something special, and it’s for a very special cause.”

“We wanted a make a statement that communicated perfection, luxury, success and the power of family. This is the brand. And we did it,” says Carlos “Carlito” Fuente Jr., President of Arturo Fuente Cigars and third-generation cigar maker. “After 15 years of friendship, I was excited to work again with Les and his team at Colibri. These are the kinds of projects that are the most fun and the most successful—the ones that are built on long bonds and have a strong purpose.“

The limited edition Colibri Astoria for Opus X is produced in five finishes: black+red; black+gunmetal; black + rose; red + black; red+gold. The OpusX medallion on the front is fabricated separately, flash plated in gold and formed to fit into the body of the lighter. On the back, the OpusX logo is laser engraved onto cutter blade, and the quote all cigar aficionados the world over know, “Only Fuente is Fuente”, is laser engraved onto blade handle. Each lighter is numbered and ships in a custom luxury gift box. Colibri will produce 250 of each finish for the US. They will ship this fall. Suggested retail is $185.

No matter how long it’s been since I have smoked one, whenever I pick up a Fuente I have enjoyed it’s like the first time all over again.
20 years ago an Opus fan, but for the last 15 a regular Don Carlos or Hemmy. 3-4 years of age seem to be in my wheelhouse with the exception of the DC Lancero. The older the better. If the Pussycats were readily available I’d smoke a lot of them.
Fuente cigars taste like fine tobacco is supposed to taste and offer a fine cigar suitable for any occasion or budget.
Cut my teeth on the Hemi Classic back in 91′, love the Short Story for a quickie but always seem to gravitate to the Classic, just smooth!
Consistency in staple products such as the Don Carlos and Hemingway are what I can expect, every time I reach for a Fuente.
Casa Cuba, Double Cinco in pre release slide lid box are the best! Unfortunately there are too few remaining…..Don Carlos #3 and #4 as well as production Robustos, I’ve smoked many hundreds of each…..I’d love to try an Opus X filler binder with Cameroon DC Lancero wrapper!!!
Categories
1
OF1
Share:
Profiles:
Profiles: